4 inspiring stories from the Media Jaarcongres 2017

Still from 'Fragments of a Life: A Curbside Mystery'

Live video, genzies, an experience cabin and an augmented reality studio. On June 29th 2017 the Media Jaarcongres took place at Studio 21 in Hilversum: inspiration and insights for the Dutch Media industry with the theme ‘A new world, a new perspective’. We selected the most inspiring stories from the Media Jaarcongres 2017 for you.

New York Times journalist Deborah Acosta stumbled upon some photo slides on the streets of New York. She followed the trail of photo slides and started filming with her phone, finding a whole bag of these slides on the corner of the street. Who were these pictures from, what happened to this person and how did these slides end up in a garbage bag?

She showed the video to her editor and started a live video project. Acosta went live on Facebook to involve the New York Times’ followers in solving this mystery. She did all of her reporting live so the audience could be a part of it. The viewers tried to help her, wrote comments and asked questions. Acosta then reacted live to her followers.

Take for example the reaction she got from John Bell Young on Facebook: “As a [former] columnist for the St Petersburg Times… I cannot imagine my editors would have ever approved a trash hunt for a story, live or not.” Acosta reacted on John live on Facebook: “You never know, this may be an interesting story, John. I know it’s live, we don’t know, it might be nothing at the end of the day or it might be something really cool. We don’t know, that’s the point.”

The end products of this project are the live video’s on Facebook and a clip edited from the live video content Acosta made during her search. Curious how the story ends? Watch the clip ‘Fragments of a Life: A Curbside Mystery by Deborah Acosta’.

“Genzies” was the word Jørgen Madsen Lindemann from Modern Times Groupused for the kids of generation Z (1996-2010). The generation that is difficult to engage for traditional television broadcasters. Lindemann showed what his international digital entertainment group has to offer to this Generation Z. They created Zoomin.tv. With the motto ‘Dare, Care, Share’, Zoomin.tv is producing more than 400 stories in over 20 countries every day. Their stories are sourced by freelance video journalists and story hunters around the world. They spread their (video) content on Zoomin.tv’s Facebook, website and Youtube Channels. They are one of the world’s biggest Multi-Channel Networks on YouTube with 1.8 billion views per month. 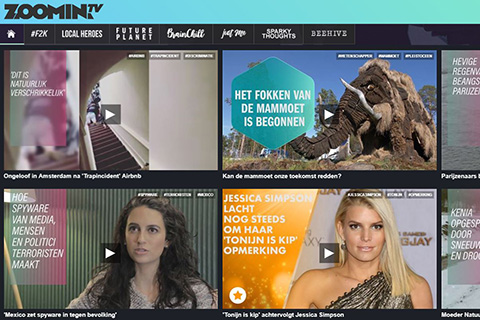 Zoomin.tv sees generation Z as people who like stories that bring change to people’s lives, focusing on inspiring, emotionally-compelling and empowering content. Their website contains series like ‘Local Heroes’, ‘Future Planet’, ‘Beehive’, ‘Games’ and ‘#First2Know’. Watch here the Zoomin.tv introduction video to get the vibe or pick one of their videos on the Dutch Zoomin.tv website.

Ralf van Vegten from NEP The Netherlands talked about the augmented reality studios they produce. With augmented reality they create and add a visual layer to the physical studio. They can add decor, a virtual roof or optically enlarge a studio. By adding the graphics to the camera footage, these features become visible to the viewers. 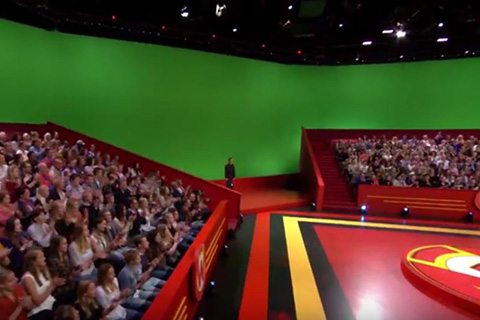 This way you can maximize the studio space and have less transportation and stocking costs. Using augmented reality, you don’t have studio or location boundaries such as the weather conditions. It also gives more control over the content and the format, for example when a Dutch format like The Voice is distributed to other countries. Watch which part of the studio of the television program ‘Wedden dat ik het kan’ is physical and which part is made visible using augmented reality in this NEP video.

Take a seat in the SENSIKS. experience cabin and have a 360 degrees multi sensory interactive experience. Cycril de Vroom, CTO at SENSIKS, explained they control scent, temperature, air flow, tremble, taste and light frequencies in the cabin, which together creates a new sensory reality. And it’s interactive, because they can measure and use the user's heart rate, skin conductance and brainwaves as direct feedback to influence the experience. 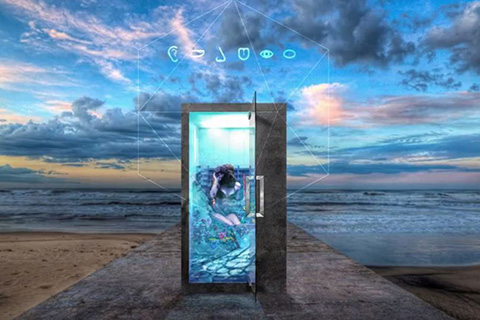 They even developed a program that everybody can use to develop their own experiences, called the Experience Recorder. That way you can, for example, design, simulate and experience your perfect day at the beach.
The cabin and the technique can be used in different domains, such as mental care, wellness, relaxation and stress reduction, education and training, home entertainment and interactive gaming. Watch an item from ‘WNL op Zondag’ about the SENSIKS. experience cabin and the way it can be used in the army.