Highlights of the Europeana AGM 2015

‘We are Europeana’ was the theme of this year's Europeana Annual General Meeting (AGM), which took place at Pakhuis de Zwijger in Amsterdam 3-4 November. AGM delegates reflected on the work accomplished in 2015 and looked ahead to the challenges and opportunities for the coming years. Team Sound and Vision was well represented at the meeting. Below a report on highlights of the event.

The Europeana Members Council election campaign was kicked-off on day one with the introduction of thirty candidates through a video. All Network Association Members had until 9 November to vote for their favorite candidates. We are looking forward to see which new members will be represented on the Council on behalf of our network, which will be announced on 24 November.

Europeana Network Communicator’s Group
Lizzy Komen from NISV takes part in this task force, which was proposed at the 2014 Europeana AGM in Madrid. Its aim is to discuss existing communication channels within and outside of the Europeana Network and to prepare recommendations on the structure of communication and the future of the Communicator’s Group. The progress of the TF was presented last week during the AGM by chair Kerstin Herlt (DFI). The group has worked on an analysis of the existing communication channels and identified shared communication needs for Europeana and the Network taking into account the different target groups for different channels. They produced a definition of the objectives of the Communicators group and drafted recommendations on membership of the Group, Governance, Sustainable working structure and working practices/workflow.

EuropeanaTech
Gregory Markus from NISV serves as the EuropeanaTech community manager and presented alongside Europeana R&D coordinator Antoine Isaac at the AGM. NISV has been involved in the EuropeanaTech R&D team since its inception and continues to be a key strategic partner for the ever growing EuropeanaTech R&D community. At the AGM EuropeanaTech looked back on 5 years of the Europeana Data Model (EDM), celebrated the conclusion of the Task Force on Evaluation and Enrichment as well as rallying the crowd to contribute their R&D and technical to one of EuropeanaTech’s many editorial outlets. We are always looking for developers to feature in our “Who's using What?” Developer Profiles and project outcomes in EuropeanaTech Insight, EuropeanaTech’s very own R&D publication.

For more info about joining EuropeanaTech and contributing to the community visit our page here. Greg is also involved in the EuropeanaTech FLOSS task force.

Day one ended with a memorable reception at the Rijksmuseum in Amsterdam. After an address by Director of Collections Taco Dibbits, everyone was invited to visit the Gallery of Honour, which holds some of the most important 17th century Dutch works of art. 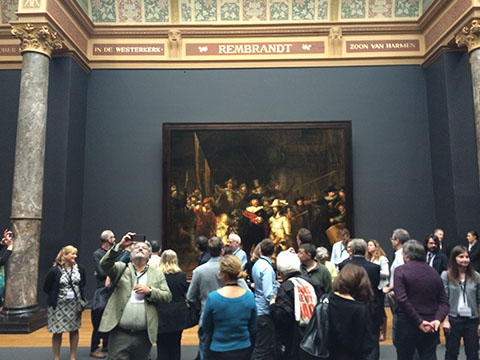 The dreams for Europeana by the European Commission

On the morning of the second day, European Commissioner Javier Hernandez-Ros took to the stage to share his thoughts on Europeana as head of the unit Creativity for DG Connect. He praised Europeana as the only significant Europe wide initiative to collect European cultural heritage content, and its database for having over 45 million items to date. He stressed all AGM attendees to appreciate Europeana as a collaborative effort and not to be in competition with one another, and for all institutes to jointly work on improving Europeana as a main heritage portal. “Let’s not leave Google to be the only source of cultural heritage on the internet”, he said, urging for further improvement on interoperability, standardization and the effort to implement the European Data Model (EDM).

Hernandez-Ros also named the Dutch Presidency in 2016 as an opportunity to raise awareness for European cultural heritage as Europeana will officially be on the meeting agenda of EU representatives. 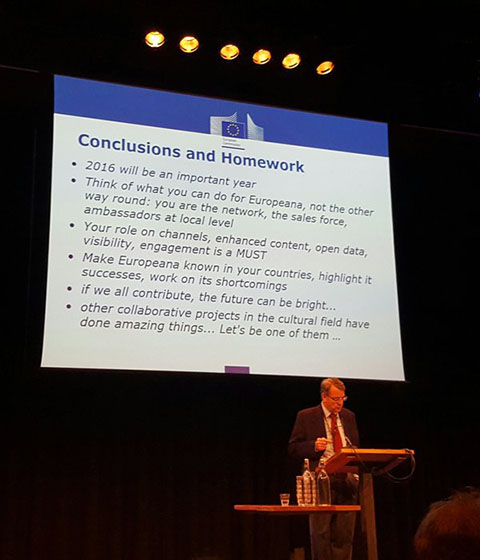 To capture the dreams for the role of Europeana for their community by 2020, participants were asked on the second day to write these down on a paper plane. After a musical intermezzo on the harmonica by deputy-director of Europeana Harry Verwayen, dozens of planes were targeted towards the stage. Results were then analysed and incorporated into a video. 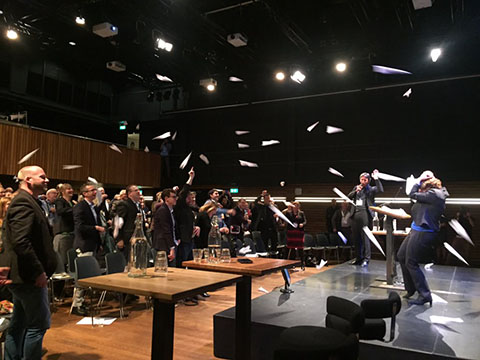 Measuring the Impact of Europeana

Before the AGM opened, Maarten Brinkerink was invited to represent the expertise of NISV with impact measurements of data and content reuse during a workshop on an impact framework for Europeana.

Over the last years Europeana has created an important online resource for use in education, tourism, creative industry and research. It is now moving away from being a portal to being a platform for sharing data with an ecosystem of users that can reuse the data and provide services and content for multiple stakeholders. It is also shaping as a networked distributed organization based on the values of transparency and equity, where all the different stakeholders through their participation in the association can influence governance and strategic direction of Europeana.

The workshop was lead by Simon Tanner (King’s College London) and Georgia Angelaki (National Documentation Center, Hellenic Research Institute, Greece). Harry Verwayen of the Europeana Foundation first introduced the importance of in the new Business Plan for Europeana. Then Simon Tanner introduced his Balanced Value Impact Model as the methodology for the Europeana Impact Framework. This model defines impact as following: “the measurable outcomes arising from the existence of a digital resource that demonstrate a change in the life or life opportunities of the community for which the resource is intended.” 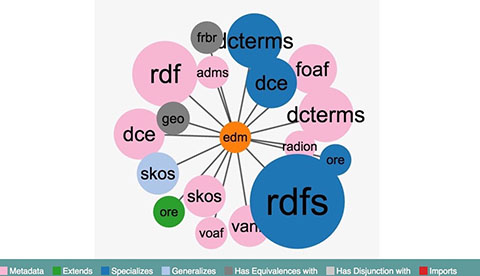 EDM turns five, so now what?

A day before the AGM kicked off a pre-event was organized in the Rijksmuseum to celebrate the launch of EDM (Europeana Data Model) 5 years ago. EDM is an advanced data model for describing digital cultural heritage data and is used by Europeana in its aggregation processes, portal and other data services, as well by their data partners, data reusers and the Europeana Tech community.

The EDM workshop was organized by Europeana Tech, with Antoine Isaac and Valentine Charles leading the day. Participants were gathered from all levels of involvement with EDM, from metadata experts involved with the creation of EDM from the very beginning, to data partners more involved in the daily practical aspects of EDM. In several presentations and breakout sessions we looked back critically on the achievements of EDM for Europeana services, the Europeana network and other initiatives like the DPLA. We discussed the future of the model and the next steps of its development.

Antoine and Valentine presented the White paper on EDM and the new EDM development plan to show what has been achieved and to set the stage for further discussion. During the first sessions a few topics were isolated for further discussion in round table sessions. Topics that were discussed in little groups were very broad and ranged from the absence of the Event class and creator roles to how far can EDM grow to stay inclusive for all and whether or not to be involved in EDM profiles outside the Europeana context. Discussions continued during the social dinner where ideas and comments could be shared on library cards. The outcomes of this EDM workshop will be evaluated and taken into account with further development of EDM.

[1] Simon Tanner. 'A New Approach to Measuring Impact for Digitised Resources: do they change people’s lives?'